After a much-lauded first day on runway, Day 2 of the Catwalk Cares Virtual Fashion Show Season 2, which was pre-recorded for the audience, opened on August 15th under strict SOPs. Moving on with the same spirit of hope, resilience and positivity on the second day, the line-up featured six designers as well as artistic fashion films.

Here’s a rundown of who showcased what at the show:

Nilofer Shahid’s first ever capsule, ‘NS Essence’ was modeled by Sabeena Syed. It was inspired by the indubitable regality, grandeur and grace of Nilofer Shahid’s Couture, translated into pure unadulterated elegance. These were timeless and chic ensembles for women who want to look graceful and elegant while attending a brunch or a soiree.

Arsalan Iqbal showcased pieces from his ‘Ulta Seedha S/S 2020 (Inside Out)’ collection which was based on the ideals of eco-friendly sustainable fast fashion. The showcase included inventive and revolutionary two-for-one reversible kurtas in blue , purple and white. Actor and model Rohail Peerzada was the model for his collection.

Maheen Karim presented a majestic capsule collection of ‘Eastern Occasionwear’ inspired by the sub-continent’s rich heritage. Modeled by Raahima Ali, the designs were regal and included modern silhouettes from a contemporary tunic and trouser look to a stunning evening wear sari as well as kaftans and modernized skirts.

The Lightness of Being

Umar Sayeed showcased an exquisite and graceful capsule titled ‘The Lightness of Being’ through an artistic fashion film starring Zara Noor Abbas. With a concept of less is more, the minimalistic aesthetic of earthiness was inspired by de-cluttering and spiritual and mental cleansing. The formal wear collection in delicate shades of white and beige is designed for dinner parties. 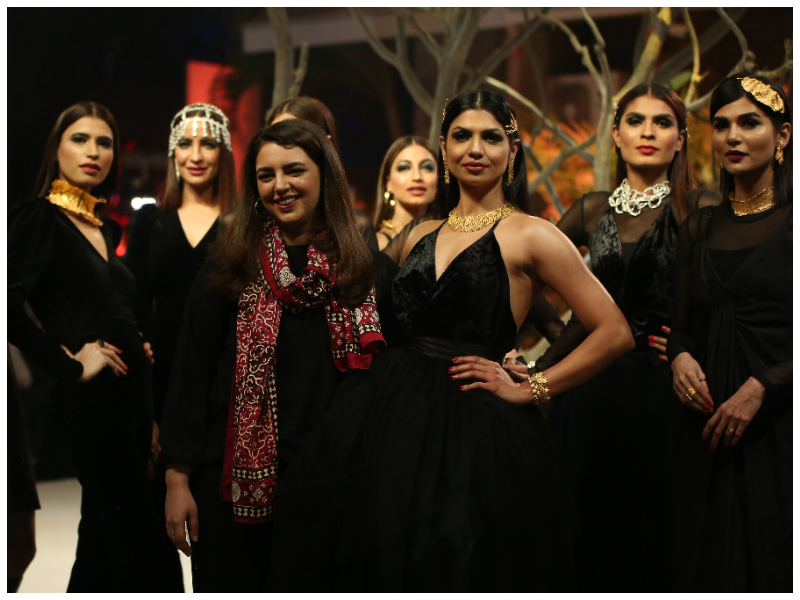