We’ve noticed some friendly invitations being exchanged between Pakistani celebrities and Ertugrul stars on social media. Previously, the lead star Engin Altan Duzayatan, visited Pakistan and later there was also news of Pakistani actors Adnan Siddiqui and Humayun Saeed partnering with Tekdin Films and TRT production for a new project. 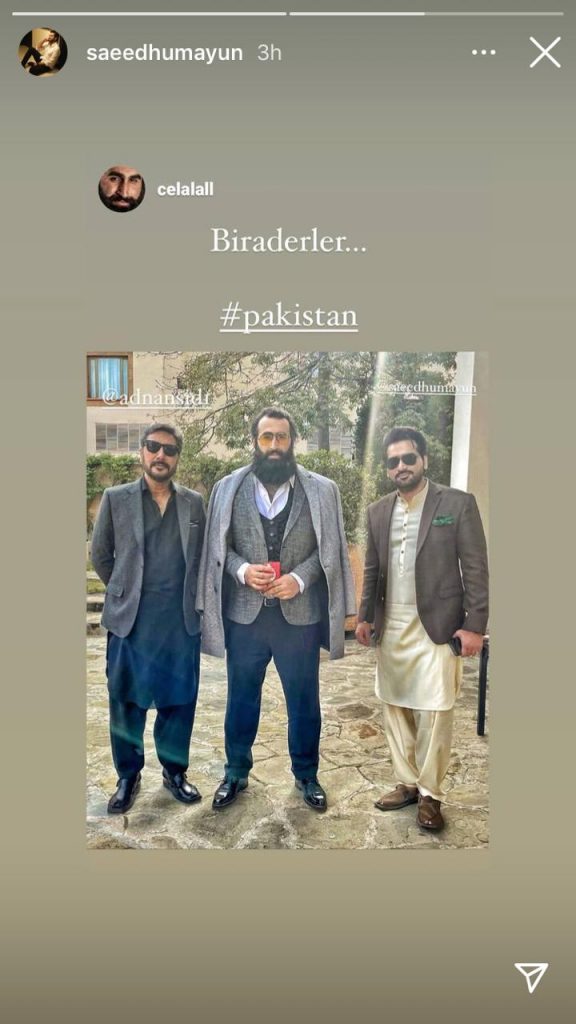 The delegation also included producer of the historical TV series Kamal Tekdin and was welcomed by Pakistani actors Adnan Siddiqui, Humayun Saeed, Federal Minister Shibli Faraz, Chairperson of the Parliamentary Special Committee on Kashmir Shaheryar Afridi and many others in Islamabad.

Adnan Siddiqui took to Instagram to share pictures from the visit and details regarding his fan moment.

“The man in the middle stands tall in physical appearance and commands immense respect as an actor-star too. Abdul Rehman on-screen and real life Cel AL has won many hearts in Pakistan with his role of a valorous warrior who is distinct in actions and thoughts. We were no exception! Look at the grins on our faces! For the entire time, he was in the room, it was bursting with an infectious joie de vivre. Didn’t feel like we were meeting him for the first time,” he wrote.

“Though he says he’s fallen in love with Pakistan and our hospitality, I must tell you my friend, you have got two fans for life in mega star Mr Humayun Saeed and a fairly popular actor, yours truly,” Adnan further shared.

In response the Turkish actor also shared his love for Pakistan and its people.

“Greetings to your humble heart who sees beautifully Like my brother @adnansid1 , Mevlana Celaladdin Rumi Yunus Emre, those who were conquered the hearts, we came to conquer your hearts and aspire to your brotherhood. Pakistan and Turkey essence brother’s Türk❤️Pak Brotherhood Zindabad !!”