The sari disappeared in Pakistan after Zia declared it un-Islamic. But itâ€™s back, in the trousseaus of Pak girls, and as formal wear.

* Saris faded from view when Gen Zia officially declared that they were â€œun-Islamicâ€.

* Today they are increasingly being worn by women who want to make a statement of rebellion against Islamisation.

* Young women also wear it as a statement of independence and individuality Indian TV soaps have helped the revival of the sari in Pakistan So has the fashion for elaborate bridal-wear sari.

Tall, statuesque and intelligent, Nusrat Bhutto was one of the few First Ladies of Pakistan who were of any consequence to their powerful husbands. And she was one of the fewer still who dressed in silk saris, a strand of classic white pearls around her neck, while Zulfikar Ali Bhutto was in office. It was a choice her daughter chose not to make. Benazir opted for the salwar kameez, teamed up always with a green jacket and a white chiffon dupatta, pinned properly to her head. A fashion statement it certainly was not, but choosing the salwar kameez over the sari has its uses: it was preferring nationalism over elegance. It was as if Benazir was dressing herself up in the national flag. But once upon a time, Pakistani women didnâ€™t need to wear their nationalism literally on their sleeves.

There was a time when high-profile Pakistani women like Fatima Jinnah, Naheed Mirza and Begum Liaquat Ali Khan, as well as Nusrat Bhutto, wore the sari unapologetically, and with elan. But then that was before General Zia came along and officially announced the sari to be â€œun-Islamicâ€. Politically, thanks to Zia, the sari in Pakistan belongs to a bygone eraâ€”itâ€™s too much of an expression of â€œenlightened moderationâ€, as President Musharraf would put it. The sari is a â€œsofterâ€ image of Pakistan that reveals too much of a womanâ€™s body for an Islamic republic. It also connotes too much tolerance for India, for political or public figures to be seen in one. Definitely not in election year at least, which is why no woman parliamentarian today goes to the assembly in a sari. However, politics hasnâ€™t stopped fashionable Pakistani women from once again expressing allegiance to the six yards of fabric that manages to stir up enough controversy amongst right-wing zealots and nationalists alike. After all, thereâ€™s nothing like a bare midriff to get the mullahs up in arms.

While it will never replace the salwar kameez in mass popularity, the sari most certainly does not face the risk of extinction either. Apart from being worn by Parsis and Hindus in Pakistan, it is also donned by women from (non-Punjabi) Urdu-speaking families. â€œMy mother still doesnâ€™t own a formal salwar kameez,â€ says Amna Jamot, who belongs to a family of middle-class Urdu-speaking migrants. â€œShe wore only saris and it comes naturally to her generation.â€ But, she admits, it doesnâ€™t come naturally to hers, though she has promised her mother that sheâ€™ll â€œfamiliariseâ€ herself with the sari soon. That â€˜soonâ€™ will probably be somewhere close to the time she gets married.

Not that young girls in Pakistan donâ€™t fantasise about their first sari. The sari has been elevated to the level of the ball gownâ€”the formal dress without which no wedding is complete. For many modern, educated girls, the sari symbolises independence and individuality. Often at the age of 18 they are allowed to wear one to their graduation party, Pakistanâ€™s equivalent of prom night. Itâ€™s a sign that theyâ€™ve made the transition from school to college and from girlhood to womanhood. The sari fulfils in them the urge to be different, as well as to look mature and elegant. Itâ€™s also become an expression of freedom and rebellion for celebrities like Ali Saleem, Pakistanâ€™s most famous cross-dresser. Better known as the persona of Begum Nawazish Ali who hosts a popular talk show on AAJ TV, Ali in his element wears nothing but designer saris with exotic, revealing and fully embellished blouses while he flirts with his guests. The sari becomes a vehicle of exhibitionism for Ali who confesses that his ultimate fantasy is to â€œdie performing on a glass stage in the middle of a vast sea with the whole world watchingâ€!

However, wearing a sari has become a statement that works both ways: you wear a sari to be noticed, and wearing one ensures that you are. This has posed a dilemma for some members of the Hindu minority living in Karachi. â€œIâ€™ve always worn the sari,â€ says Ira Bai, a Hindu housemaid working in the cityâ€™s posh Bath Island. â€œBut my daughter now wears the salwar kameez. She lives in Hyderabad and commutes a lot between cities. Wearing the sari attracts too much unwanted attention.â€ It helps explain why the younger generation of Hindu Pakistanis tends to limit wearing saris to family celebrations and festivals. The sari also has to compete with the more â€˜globalisedâ€™ look that many young Pakistani women favour.

One of Pakistanâ€™s trendiest fashion designers, Deepak Perwani, belongs to a Hindu household but confesses a disinterest in reviving saris in Pakistan. He prefers to make risque and funky western outfits that appeal to the hip and rich elite. â€œI design for the young, and the young in Pakistan donâ€™t wear saris,â€ he says. Out of every 100 clients only seven or eight will go for one, he adds. â€œItâ€™s an extremely elegant garment and the salwar kameez can never replace that elegance and style, but the sari belongs to the gentry of Pakistan or the older generation. The old aunties still wear saris but itâ€™s just not practical for the modern woman.â€ Nevertheless, he adds, he would want his bride to be married in one, whenever he decides to tie the knot.

Thatâ€™s just it. To the new generation, while the sari in Pakistan has become defunct as a casual dress, it has at the same time been elevated to the official level of the ball gownâ€”the formal dress without which no wedding can be complete. A couple of saris are de rigueur in a trousseau, which is why Umar Sayeed, one of Pakistanâ€™s top-notch bridal couturiers, claims the sari is making a comeback. According to him, itâ€™s the increasing demand for saris for weddings that allows sari-manufacturing areas like Karachiâ€™s Orangi Town to prosper. â€œSomeone must be buying these saris for the production to be on a constant high,â€ he says. â€œAs a designer I see a 1:3 ratio (of saris to salwar kameezes) and brides from all over Pakistan are coming to us for saris to wear to their Valimas (a traditional dinner hosted by the groomâ€™s parents one day after the main wedding ceremony). The demand for bridal saris is increasing. They are timeless and people realise the worth of investing in them.â€ Maheen Khan, chairperson of Fashion Pakistan, one of Pakistanâ€™s fashion councils, is one of the few designers who have modernised the sari in an attempt to revive it. She has created the â€˜half-sariâ€™, a two piece combination that tucks a separate dupatta into a folded petticoat.

Designer saris in Pakistan, mostly made of delicate French chiffon and embellished, easily sell for over 50,000 Pakistani rupees. Young girls rarely opt for banarsis or other traditional silk weaves, and prefer to wear simpler chiffons or light silks with stylised sleeveless blouses. Women who wish to pick up cotton saris still look towards India for the ultimate stamp of authenticity. While formal saris are bought for the label they come with, everyday wear must bear the â€˜Made in Indiaâ€™ tag for them to be considered authentic. Though the sari has undoubtedly seen a revival in Pakistan, in no small measure thanks to the popularity of Indian soaps, it begins to fade out as you go up north. The sari is strongest in the southâ€”an interesting variety can be seen in Karachi, the cosmopolitan city that is home to several different sects and communities. As you go up towards Punjab itâ€™s worn mainly as an extravagant bridal costume, and further up in the North Western Frontier, it gets lost under the folds of the burqa. And it certainly wonâ€™t regain its status of yore until we see Begum Musharraf draped in one. 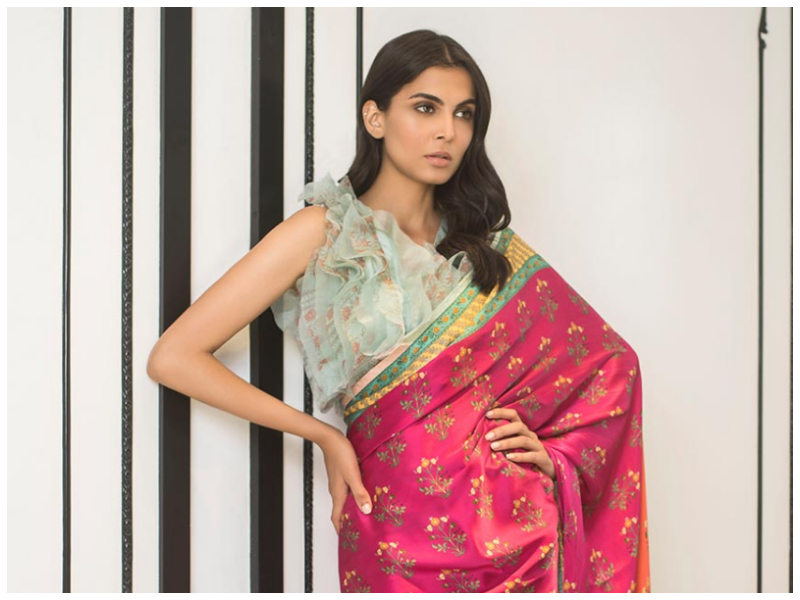 When will Pakistani fashion be more inclusive?