The recent passing of the Citizen Amendment Act in India has led to protests nationwide, and gradually celebrities are also joining the movement. The recent celeb to join the movement was Deepika Padukone who was seen at the Jawaharlal Nehru University. Her appearance at the protest was met with conflicting views; many supported her move, others condemned it, while some also claimed that she went to promote Chhapaak (releasing on 10th January). This was followed by calls to protest her film.

What people forgot to notice is that intentions aside, the actress took an obvious risk prior to the release of her movie, which she is also producing. Perhaps it was a calculated risk but it indeed made a statement and raised a pertinent question â€“ where are Bollywoodâ€™s â€˜heroesâ€™? 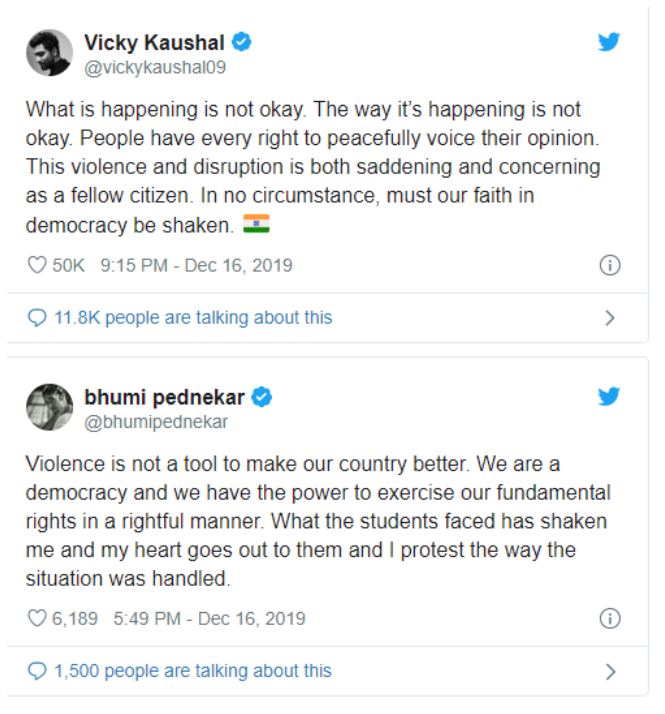 Those who have been keenly observing the protests must have noticed that the police crackdown against students was condemned by many in Bollywood. Expected names like Swara Bhasker, Richa Chadha, Anurag Kashyap, Anubhav Sinha, Mahesh Bhatt and several others spoke about it on social media and some even turned up for rallies. Soon after A-list celebs joined hands as we saw Sonam Kapoor, Deepika Padukone, Priyanka Chopra, Hrithik Roshan, Sonakshi Sinha, Huma Qureshi, Taapsee Pannu, Alia Bhatt, Yami Guatam, Vicky Kaushal, Varun Dhawan, Ayushmann Khuranna, Rajkummar Rao and many more condemning the violence.

A post shared by Indian Express Entertainment (@indian_express_entertainment) on Jan 7, 2020 at 10:50am PST

However, the absence of the leading men in Bollywood is very evident. The bigwigs who rule millions of hearts in India and across the globe are MIA. Where are the Khans, the Kapoors and the Bachchans? They undeniably have more power and position, one of them has done a show about issues polarising their country so why this sudden silence? Not even a single one (some even close friends) lauded Deepika’s stance.

On the other hand, DG ISPR Asif Ghafoor took the opportunity and register his take on the actor’s courage.

We cannot say it is lack of empathy or concern on the part of the Bollywood heroes but perhaps they donâ€™t favor running the risk and be subjected to troll brigades and hate mongers. They are no more â€˜heroesâ€™ who save the day; in contrast, it is the women who are challenging the status quo in Bollywood. Even prominent Indian film-makers have endorsed the idea that female actors are more open to challenging stereotypes on screen than their male counterparts. Despite the fact that women face harsher criticism for their brazen opinions than men in Indian cinema or worldwide, have a shorter shelf life, are paid less and labeled dispensable, cannot seem â€˜to generate box office numbersâ€™ or are more than often eye-candy in the larger scheme of things, the very women are changing the course of conversation as well. 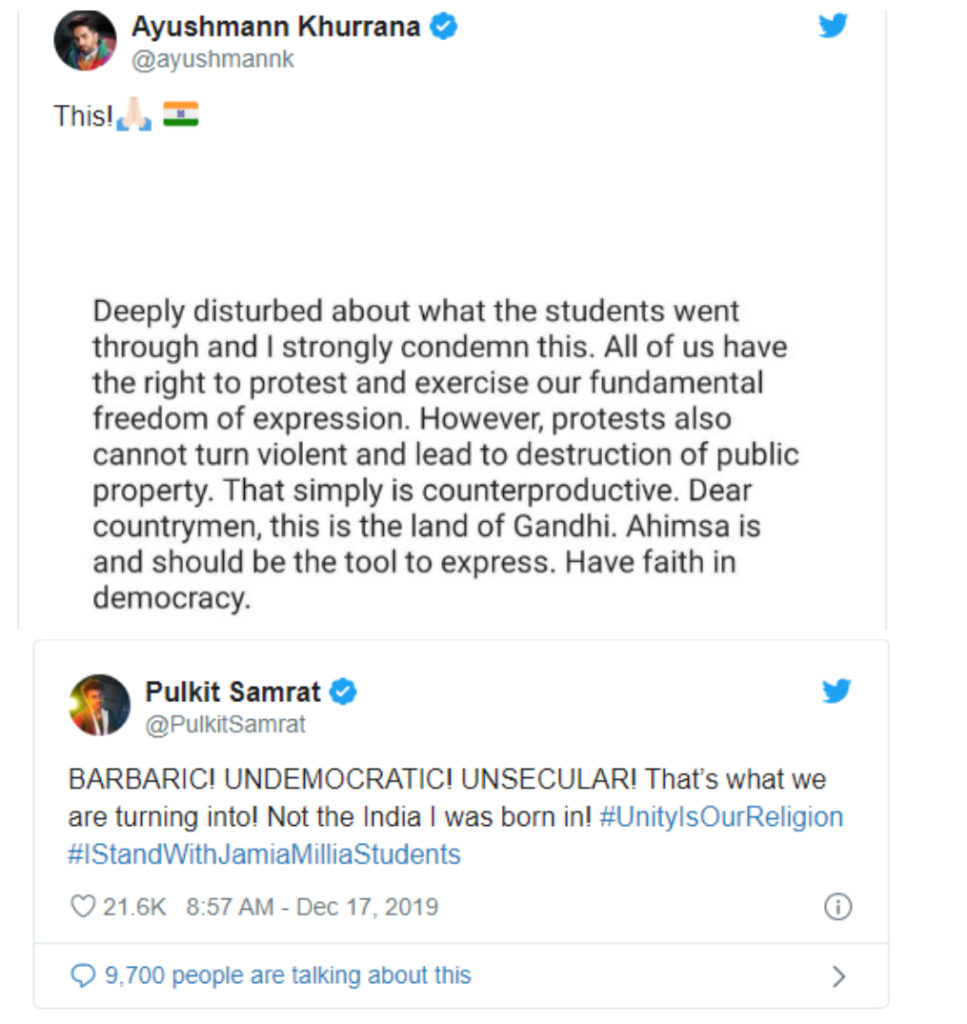 In the male dominating business of films, female actors have carved a space for themselves, by not only standing up and voicing their concerns (case in point: Me Too movement) but also staying true to their political inclinations. Swara Bhasker has openly talked about losing work due to her â€˜political adventurismâ€™. Deepika was outrageously threatened in 2017 prior to Padmaavatâ€™s release; a BJP leader announced bounty on her head and Karni Sena wanted to chop off her nose. Kudos to her that even after facing such life-threatening situations, she became a part of the JNU protests. 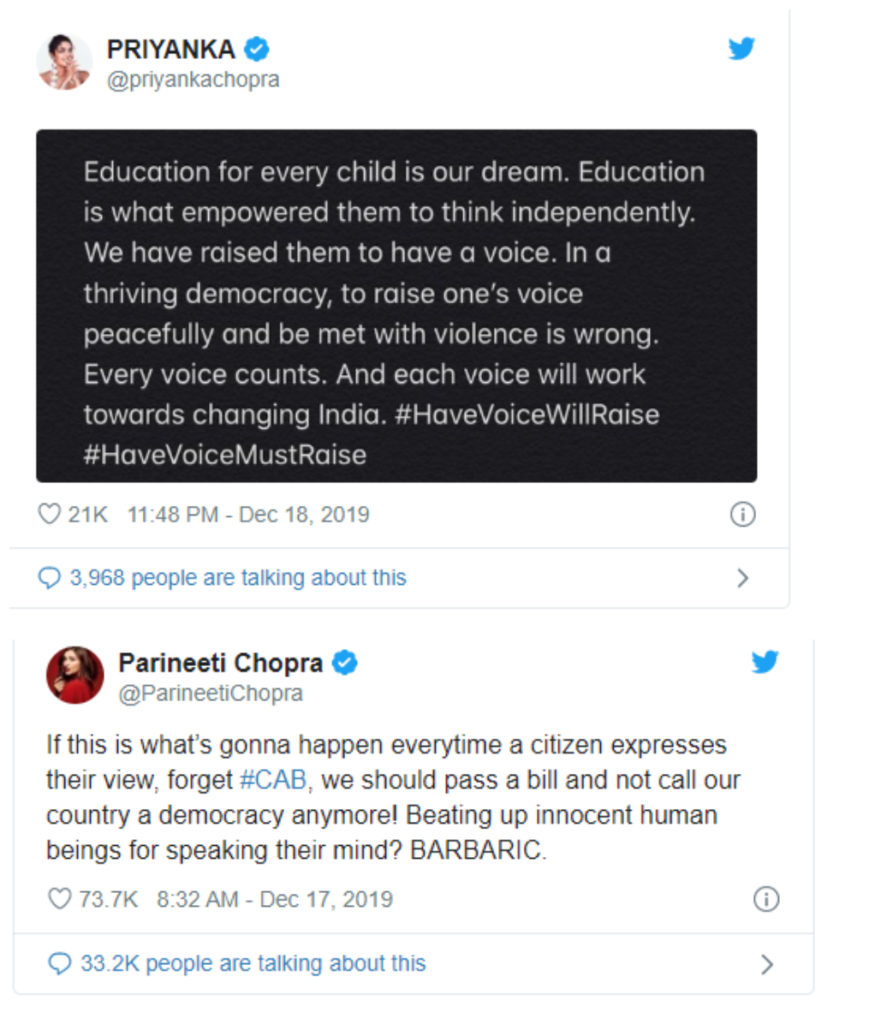 The men of the film business, especially the crÃ¨me de la crÃ¨me, are perhaps too cautious to jump into political debates. Their interest in social and societal issues can only be a part of drawing room discussions or while promoting their cause-centric films, otherwise they retreat to asking questions about mangoes (hint: Akshay Kumar and Narendra Modi). 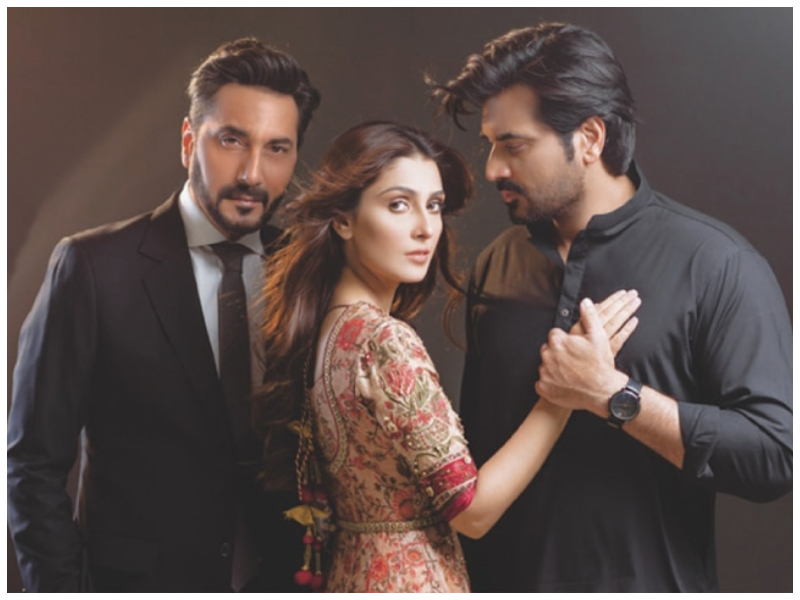 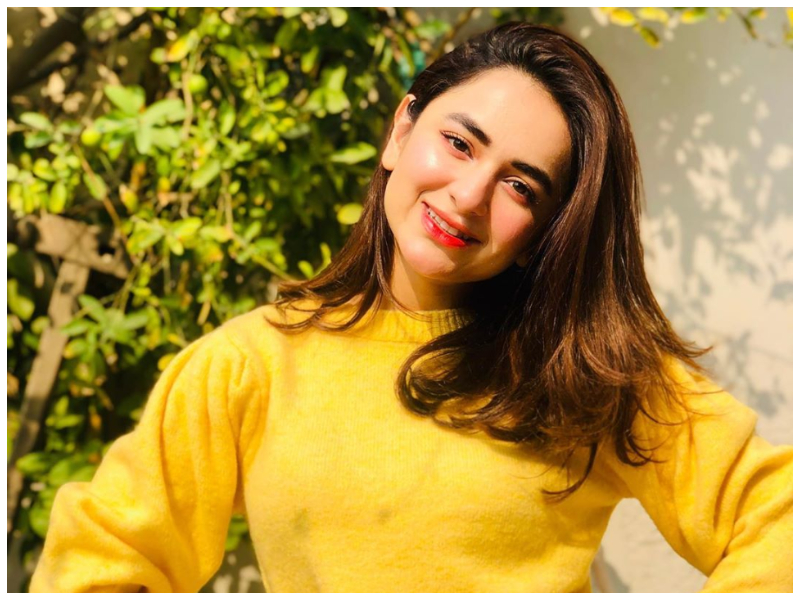